I spent the past weekend fishing the lower Eastern Shore of the Chesapeake Bay, operating out of a tiny creek north of Fisherman’s Island.  The target was cobia on fly, and I had the flies, gear, and strategy to make it happen.  Unfortunately it was not to be, as the winds whipped up out of the West and Northwest at 10-15 knots both days, and sight fishing, save for a 2 hour window of calm on Saturday, was impossible. We ran the buoys in the time we could, and cruised along the crab pots looking for big, brown fish, but without any luck.  The closest call came at a large reef in the morning, where I spotted a large brown fish cruising 80′ behind our drifting boat.  I could not identify the species, but given the size, it was either a bull shark, or a massive cobia.

Given the conditions, the alternative was fishing local artificial reefs with heavy jigs and sinking fly lines, hoping to score a deep cobia or red drum.  I and my friend put in several hours of hard work, but only had one 30″ drum to show for our efforts.  We did catch a variety of croaker and seatrout while jigging smaller baits and lures, and ran into a few snapper bluefish that cut the tails from our jigs. 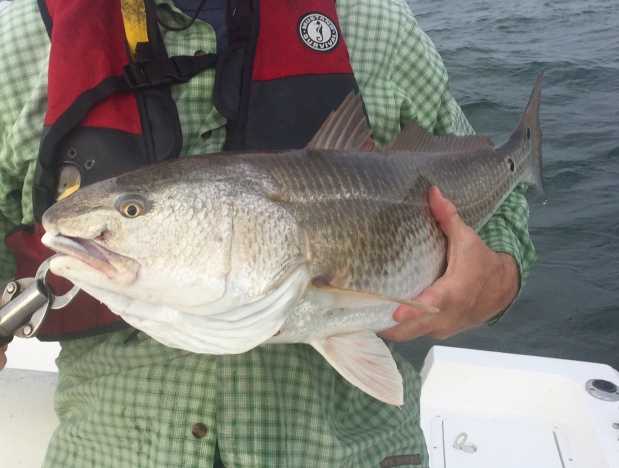 We used 4 ounce jigs to keep contact on the bottom in swift current, and all fish came among the rubble piles of the reef.

I did fish the bay-side flats in one of these creeks on day two, when stronger winds and bigger waves kept our tiny boat from running to the artificial reefs.  This forced us to fish the flats of our local creek with the outgoing tide, and we found a pocket of beautiful, gin clear water to drift, working flies and lures for seatrout, striped bass, and red drum.  We never found the trout and drum, but we did catch striped bass, and landed 5 nice houndfish on fly and live bait.

Having just come back from the keys, I would describe houndfish as smaller, thinner barracuda (or super-sized needlefish), and they are as aggressive and acrobatic as any ‘cuda on these shallow flats.  They would attack in pairs, streaks of green and iridescence in the water, competing for the same meal.  When struck, they would make drag scorching runs on my 8 wt, leaping from the water, cart wheeling through the air and crashing down. 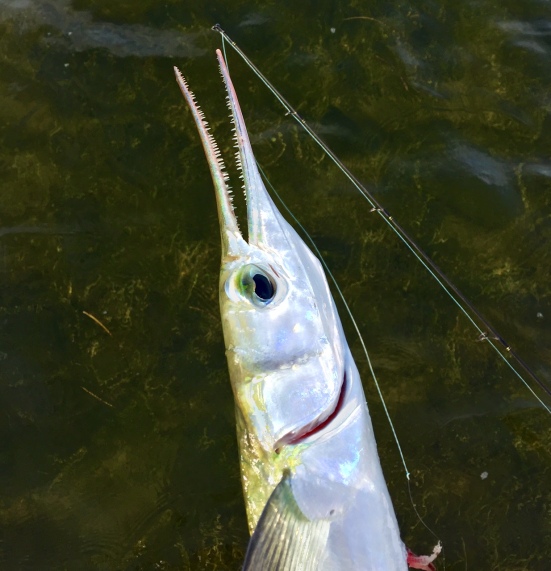 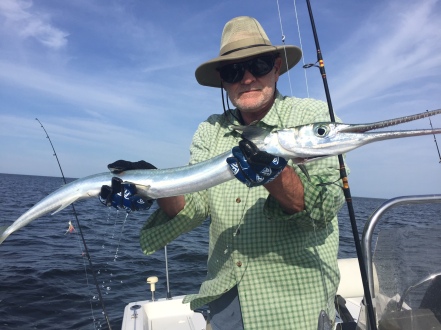 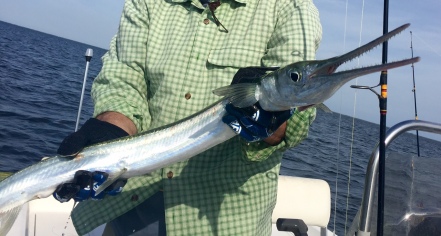 The fish were big – around 3 feet long and between 3 and 6 pounds, with the largest fish taken on fly.  Given the trouble finding cobia, I was happy to find these guys willing to play.