I love bonefish.  But I never thought I’d say that.

As short as 6 months ago, I thought they were all hype – a fish to shake ungodly sums of money from the pockets of fishermen (through space age rods and travel agents).

But…they are not all hype.  And after spending the last week in the Bahamas chasing them, I have to admit that I’m in love.

On Saturday I and my friend flew into Congotown Airport in South Andros.  We were met at the airport by Ray Shewneck, the manager of Bair’s Lodge.  Ray, along with his wife, Ann, would be managing the lodge for the week we were there.

Ray cracked open an ice cold beer for each of us, and paid a cabby to take us to Bair’s, located between Little Creek and Deep Creek along the eastern coast of the island.  Arriving at Bair’s, we were greeted by more drinks, snacks, and a tour of the lodge by Ann.

The lodge had multiple outdoor showers, a firepit, kayaks, an outdoor patio, an open bar (where guests could grab a beer or make themselves a drink), a small selection of clothing and tackle for sale, and separate A/C units inside each room of the lodge.  The boats were moored 40′ out from the beach, beautiful green and white Maverick HPX skiffs.

With the low tide, and bright sunlight, my friend and I immediately geared up and walked out onto the backyard flat by the lodge.  We saw a few small sharks and barracuda swimming by, and a large stingray that swam at us, rose to the surface, and began thrashing its tail from side to side above the water (truly odd behavior) before swimming away.

After an hour of walking, I saw it – a large bonefish in 8″ of water.  I stalked it, and when I was 80′ away, I made a long cast.  The fly landed 5′ behind the fish, but the fly line landed on top of the other two bonefish I had never seen.  All three fish spooked, exploding off the flat in a frenzy of splashes.  Bonefish 1…Matt 0.

Our first day on the water was with Gary.  Gary is a man of the people…a combination of being silly, outrageous, and fishy.

We went with Gary into one of the local creeks that traverse the island, and spent the day rarely seeing any bonefish.  The winds were high (25 mph gusts) and cloud cover would often limit visibility to 15 feet from the boat.  When we did have shots, we connected at a low percentage, finishing the day with two bonefish each. 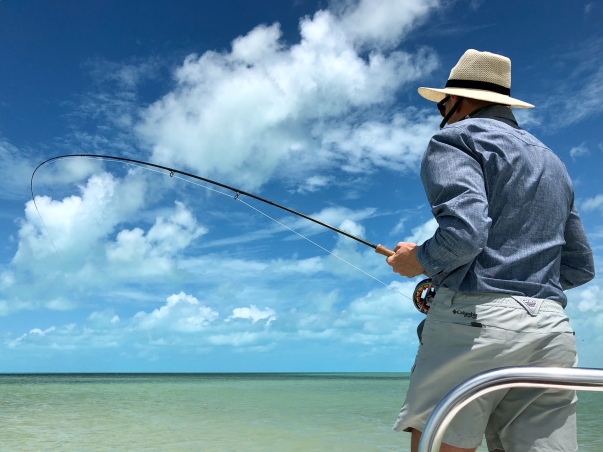 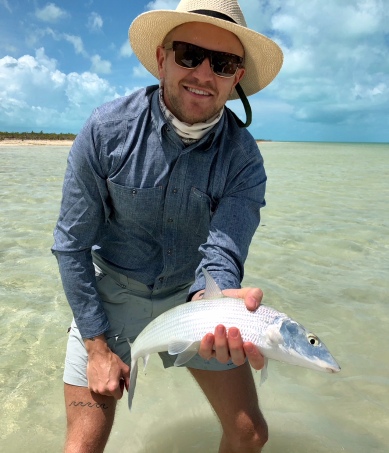 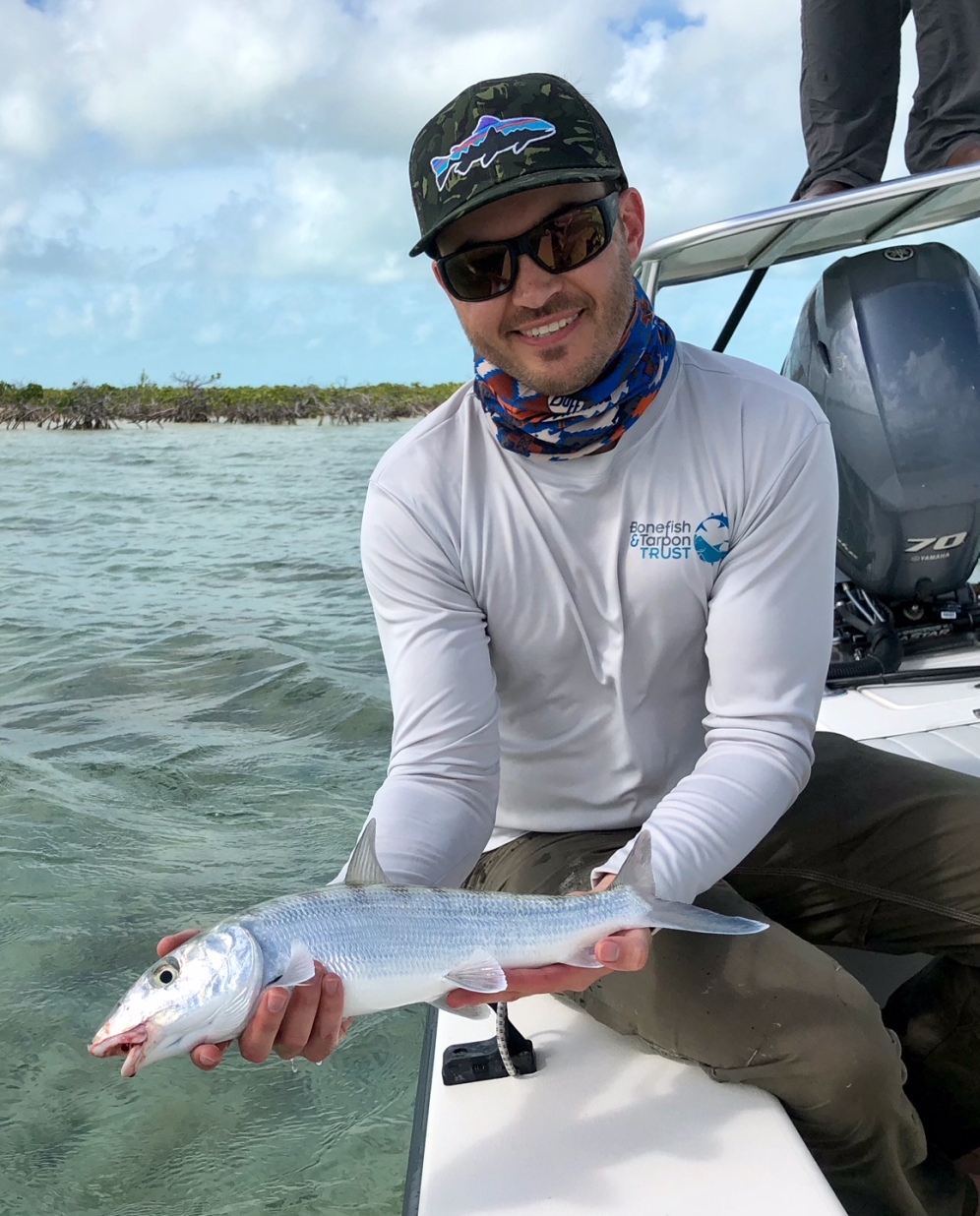 Was that a bad day fishing in Andros?  I ultimately didn’t know, but hoped we would have better, faster paced days in our future.

We spent Day 2 with Harlan, an even more silly and boisterous guide who told us stories of his days living on the rough streets of Nassau, and his love life.  Harlan took us to the west side of Andros, where hardcore bonefish men know that the biggest fish live, along with Tarpon and sometimes Permit.  That said, this was our slowest day, with heavy cloud cover, wind, and few fish to spot.  Each of us caught one fish, though my friend’s bonefish was the biggest of the trip – a whopping 8 lb beast that took him deep into his backing on two long runs.

The fish had swum to within 20 feet of the boat when it was spotted, and after an accurate cast, and listening to the guide’s coaching (long slow strips with a pause were required most days) he had the coolest “eat” of the trip.

That said, after such a slow day, we questioned everything.  Were we just awful fly fishermen?  Were slow days the norm with these fish?

We left port with Gary in the rain, and fished out front from the lodge to mudding fish.  We caught multiple bonefish and snappers, casting fast sinking flies to where sandy, cloudy water indicated feeding fish. As the rain left, and the sun returned, Gary took us into his home waters of Deep Creek north of Bair’s.

The wind was low, and we could easily spot fish hundreds of feet from the boat.  As Gary began to pole us along a mangrove shoreline, he spotted a barracuda.  Using my 10wt, and a green needlefish popper, I cast again and again to the cuda, stripping as fast as possible (one handed, then two handed retrieves).  The fish was fired up, spinning and following the fly, but it would not eat.

I found the solution after a couple minutes:  As the fish began to follow the fly (5 feet behind it) I swept the rod tip from straight at the fish to behind me.  The fly surged forward, and the fish accelerated with stunning speed and ate the fly.  After a trout set of the hook (the only option at that point), the cuda did what cudas do best – leap from the water again and again and pull fly line and backing from fly reels.  After 5 minutes, it was all over, and the cuda was thrown in the hatch (dinner for the “old lady in the village”).

We poled along deep creek, and enjoyed shots at large snappers, bigger cudas (which could give two shits about our flies) and more bonefish.  We landed three bonefish for the day, sighting and casting to small pods of fish that were eager to eat.

Again, the fishing felt slow, and we wondered if we were just that bad, or we just weren’t seeing many fish.

Finally, we were going to the south.

South Andros is the fishery that the island is known for.  Miles of wadeable sand flats, huge schools of big fish, cudas and sharks everywhere you look.  At least that was what I’d read.

The truth was exactly that.  We spent the day wading and sight casting to massive schools (100-1000 fish) with our guide Jason.  Jason was quiet, technical, and helpful, and worked with us to catch multiple fish from the large moving schools of bonefish that would blacken the sands of an island.  We caught a good number of large fish that day, with most in the 3-4 lb range (fish that would take you into your backing).  And we only lost one fish to a cuda (a win in my book).

I fished a 6wt and 8wt, and had to scale down to very long leaders and light flies to get the fish to eat.  Pink puffs (an ancient bonefish pattern) performed well, landing without a splash and sinking quickly).

For lunch, we went to a blue hole, parked on the edge, and I spent a half hour (not eating lunch) casting to large jack crevalle, sharks, tarpon, yellow jacks, and everything else that lived in that cobalt blue cave in the middle of a shallow southern flat.  One of the coolest things I’ve ever seen.

One lesson learned in the south – wear long pants.  My friend (always fashionable) refused to wear the ugly drapery of fly fishing’s flats pants.  He paid for it, having his legs ripped apart by doctor flies (deer/horse fly relatives that love low winds and human thighs).  For the rest of the trip, he wore his rain pants.

With that all said, we both had an amazing day, deeply satisfying as only a successful fishing trip can be.

Ronny.  What a guy.  Excellent fisherman, but overly agitated (or agitating?) guide.  And yet I learned more from him than any other guide during my week at Bair’s.

We fished Grassy Creek, south of Bair’s, and enjoyed shots all day at pods and large schools of fish.  We caught them all day, despite (1) learning that sunscreen on flies will prevent any bonefish from ever putting said fly in its mouth, and (2) letting a lemon shark eat my bonefish by accident (while watching my friend hook up to a bonefish himself).

Grassy confirmed my suspicions that the majority of fish were in the south of Andros, and that they were probably preparing to spawn. 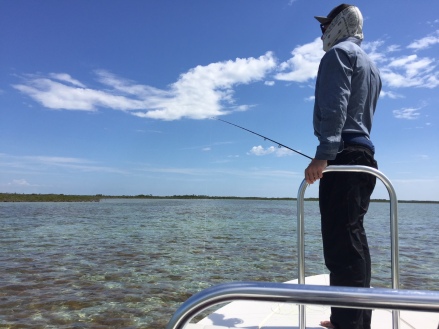 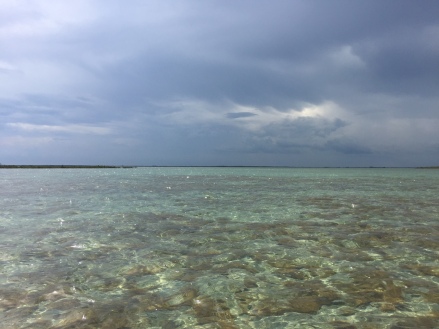 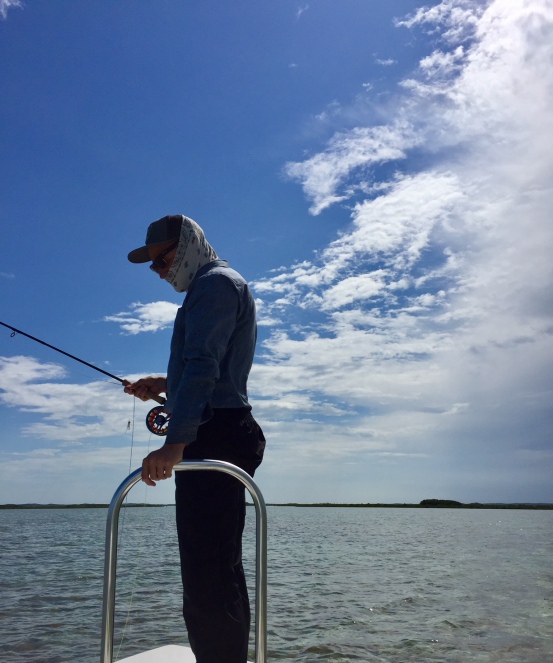 Leslie is the head guide at Bair’s, and the elder statesman of South Andros.  To spend a day with him is to spend a day with fly fishing royalty.  And so it was that we spent our final day with Leslie, and watched the week’s worth of successes and failures culminate in a final performance.  We were just better:  Our casting, our ability to seduce a fish into eating by watching their body language, our ability to adjust for wind and fish movement.  We had grown, and Leslie, with his easy-going yet focused temperament brought out our best.

We fished individual fish and small pods in Little Creek, connecting to four fish in the morning.  After lunch, my friend jumped off the boat (headed to an early flight), and I spent the afternoon being guided by Leslie, and casting to large schools of big fish along the shoreline.  I caught dozens on fly, including many on large clouser minnows with heavy dumbell eyes.  It was intoxicating, and when the day was over, I was spent and happy.

If reading this makes you hungry to go chase bonefish, I’d highly recommend a few days at Bair’s Lodge in South Andros.  The food was amazing, the staff friendly, and the bonefish hungry.  It’s not cheap, but for the experience, it is hard to beat.