After seeing a few demo videos and doing a little research, I was able to get my hands on Redington’s new fly reel, the Behemoth.  It’s a really unusual offering in the big-game fly reel market, with looks straight from a science-fiction movie, and a price point (around ~$100) far below similar reels.  How?

This reel is die-cast – something that fly reel manufacturers have done in the past, but typically for entry level trout reels.  By doing this, Redington (now owned by Far Bank Enterprises, along with Sage and Rio) can reduce the amount of aluminum needed per finished part, and pass along the savings to the consumer.  The Behemoth (and I say this as an engineer) looks like it was developed with the aid of computer-driven modeling and possibly stress analysis, which would further reduce the weight of the part, and again, cost to you and I. 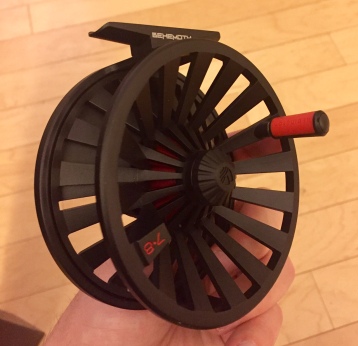 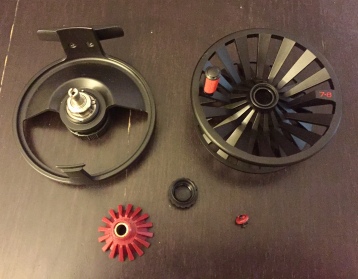 The question is, can this reel handle several days of false albacore fishing without breaking down? My initial thinking leans towards yes – the reel has a massively powerful, and easily adjustable cork disc drag, and the reel looks sufficiently tough. With that said, in the center of the reel, mated to the drag, is a plastic (potentially plastic/fiber composite) gear, which engages with the aluminum spool. While this feature reduces weight, it may wear out due to repeated fast torqueing of the reel (for example, when an albie first takes off), or degrade due to exposure to sunlight.

All in all, for the price, this is a pretty sweet reel, and I’m excited to hook something big with it this spring.

I took my 6wt Behemoth fly reel to the Bahamas, hoping to use this reel (and my Sage Motive 6wt) to catch some smaller bonefish, jacks, and snappers.  The reel did have issues, like when the floating line “snuck” out between the spool and reel, and I had to separate the two components to get the line back onto the spool.  After fishing a good amount with the Behemoth, this seems to be the biggest issue with the reel (loose tolerances around the mating of reel and spool).  However, when I hooked up to multiple 1-2 lb bonefish, the reel was a champ.  The drag seemed to work great, and despite a few dunkings (and grinding in some sand/ debris as a result), it kept working.

The 6wt kept chugging on through the summer and I was able to take a few more fish on it before shelving it for the winter.

A little on the negative side:  My 8wt Redington Behemoth reel has started to corrode where the black coating has been stripped away through general wear and tear.  That’s part of what you are paying for with a $110 reel (not an impervious anodized coating), but the reel and drag are still working very well two years in.